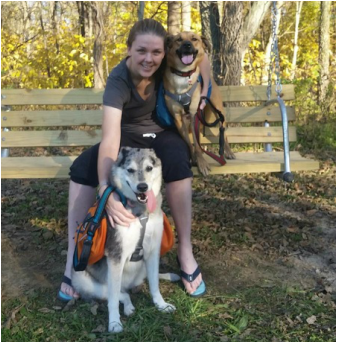 I was immediately struck by Andrew’s skill with a reactive dog.  He treated Macey with respect and compassion, and his professionalism put me at ease from our first meeting.  After spending ample time with Macey, Andrew worked with me to create a training plan with which I was comfortable and that would fit our situation.

Through individually tailored private sessions and home visits, Andrew has helped Macey develop confidence in new situations and improve her social skills with other dogs.  She has learned to control her impulses and behave appropriately during dog-dog interactions.

Eventually, I was able to introduce a new dog into the house.  Mikita, a 1 year old shepherd mix, was a “frequent flyer” at the humane society.  She had been adopted and returned four times in her short life, and her erratic behavior reflected this insecurity.  Separation anxiety, housebreaking difficulties, destructive behavior, reactivity towards strangers… this dog had it all.

Andrew has been instrumental in creating an atmosphere of structure and stability for Mikita.  In addition to working with her in an adult obedience class, Andrew has provided significant guidance in introducing Mikita to new people and helping her build confidence in new situations.

I am constantly impressed by Andrew’s consummate skill and the depth of his knowledge.  He has been an enormous asset to me and my dogs, and is the only person I trust with my girls.  More importantly, my dogs—once terrified of men—both adore Andrew; to me, that speaks volumes in itself.